You are here: Home / Podcast / Yeah, About That Money We Lost…..(My Grow Your Dough Challenge Update) 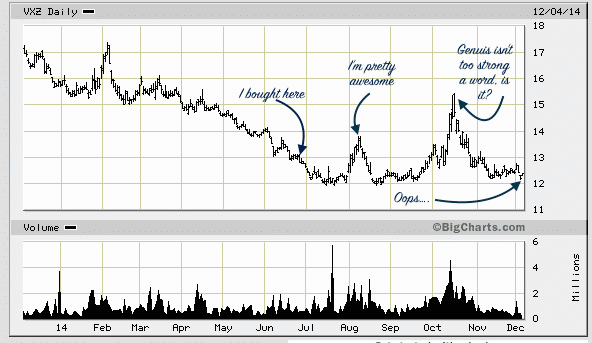 I’m taking part in a year-long competition to grow $1,000. You can see my strategy here at the beginning of the year. Here you can see what happens when I’m flying high near the beginning….yeah, those were the days….

The disaster we affectionately call my “Grow Your Dough” portfolio continues.

While the “sheep” in our contest prove what we knew before (that slow and steady wins the day), my “go for broke” strategy to take advantage of low precious metals prices and low volatility buries me.

Over a longer term I might win (and when this portfolio roars back, it’ll roar back fast….).That sounds like whining, doesn’t it?

For that reason alone, I’m going to make only minor adjustments to the mix. But we’ll talk about that later. Let’s start with “what the hell happened” this last month?

Here’s where I stood October 1: Not only has my “big winner” (EDC) descended from some big highs, but my mining company, DNN, is following precious metals right into the depths of one of their worst markets in a long time.

Compounding matters is this: What a moron. I was up $3 on VXZ and I DIDN’T SELL. I’m smart enough to know about stop losses and limit orders….why didn’t I place a sell on something as volatile as VXZ? I’ll never know.

Oh What, Oh What Shall I Do Now

It’s time for me to turn this “play” account into a long term fund. With regard to the contest, this is like putting in the JV team and the guys who’ve sat the bench all season. Time to get responsible.

I’m going to place stops on all of my positions except ABEV. I’ll hold that long term, because that’s a stock I can build around.

EDC is too volatile. Had I purchased a straight emerging markets ETF instead of a leveraged ETF, I’d still be well in the black now. But because I used a trading ETF, I’ve gotten hammered. In fact, with this one, I’m going to sell today and purchase the Singapore exchange (one of my favorites) for the long term.

DNN I’ll dump as soon as it reaches $1.70 again. I know that means I’m looking for a 70% up, but I’m not in a hurry and mining is low right now….I don’t see any reason to panic and sell my mining stock at the bottom.

What Did I Learn?

To be frank, not much. With a one year time frame I had two choices: play the “win” game or play “slow and steady.” I don’t regret playing to win. I also like that you got to follow my trades all year and see the ups and downs of an aggressive portfolio. I asked for risk and I got it…in spades.

I’ve already agreed to join a NEW competition for 2015. That’ll require a new account. I can’t disclose yet what I’m doing….you’ll see that soon!