You are here: Home / Save / The Time I Almost Looked Like a Money Idiot in Print 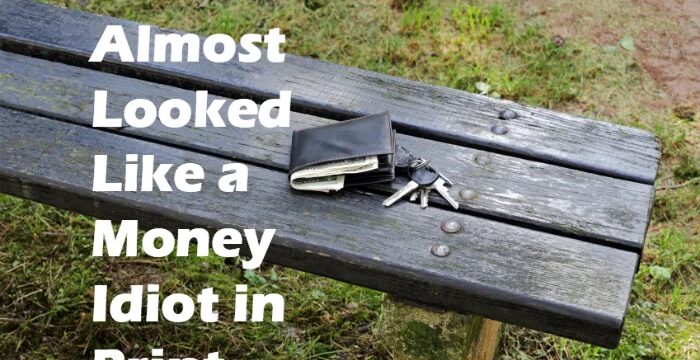 Here’s a story about how, even after three years writing about money, I have no idea what I’m talking about.

I was contacted by a reporter for Woman’s Day, who wanted my best tip on saving money.

I sent something back quickly about automating saving at the beginning of the month and putting it into a separate account helps keep things out of sight, out of mind, and ultimately makes it easier to save (since you don’t have to use any conscious willpower).

She didn’t think that was interesting enough. Or innovative. She thought maybe her readers were all already doing that, so what else do I have?

I sent off another one, quickly.

Then, I told Joe about it.

See, my husband (whom I’ll now refer to as “Brent,” since that’s his name) and I save half our income. We max out his 401(k), and we max out both IRAs. That doesn’t get us anywhere close to half our income, so we put the rest in an index fund.

Which I told the reporter was used for short-term savings.

Joe said, “don’t tell a reporter that! Or at least if you do, don’t link here. You should never put your short-term savings in an index fund. Instead, put them in a money market account.”

Okay. Wait, how do I not know what’s going on in my shared financial married life?

Immediately, I texted Brent. “Joe says we shouldn’t be saving in the index fund.”

I’m sure he just LOVES when I text him things that start “Joe says…”!

Brent explained that the index fund was not our short-term savings plan.

“But! We used that last year for our down payment!” I responded.

“Right… and a down payment is, by definition, something you do not pay every year. That was an exception.”

“Are you sure? Joe said to put our money in a mutual fund instead.”

“There’s no way he said that.”

“Oh, um, maybe something else that starts with an M?”

I could just picture Brent looking at his phone and shaking his head.

So, I edited my quote, and if the reporter can be trusted, my money tip will not be the ramblings of a money idiot I wrote before this conversation happened.

The Moral of This Story

Heck, you don’t even need to know the difference between a mutual fund and a money market account.

You just need to know and trust someone who does.