You are here: Home / Podcast / Is Now Really The Best Time For Your Roth Conversion? 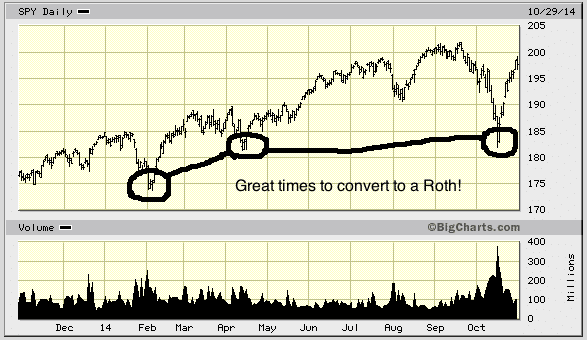 A Marketwatch piece by Bill Bischoff calls yesterday “the perfect” time to convert your IRA to a Roth. True?

I don’t think so.

The best time to convert to a Roth IRA

Here’s the basics about how the conversion rule works: You’re allowed to flip your traditional IRA money over to a Roth IRA and pay the tax on the amount that you’ve flipped over. There are a few specific rules that you’ll need to follow, but generally, if you have the money set aside to pay the tax (you can’t pay the tax from IRA funds without incurring a penalty) flipping money from taxable when you use it to tax free is a good idea for many people.

Who Gains Most From a Roth Conversion

If you have a long time to go until you retire, paying the tax now will be small when compared against the amount of money you’re going to gain in your now tax free account.

Also, if you know you’ll be in a much higher tax bracket when you withdraw funds, it’s a good idea to pay a smaller tax now than more down the road.

Who Loses in a Roth Conversion

If you don’t have long to go until you’re going to withdraw the money, there might not be enough time to justify the swap. That problem is compounded if you’ll also be in a lower tax bracket later. You’ll end up paying a higher tax today than you will a few years later….not a good idea. So, is it a good time to flip into a Roth?

Here’s why it isn’t the “perfect” time. If you think about the average person with an IRA, that money probably isn’t sitting in cash. It’s sitting in investments. If your goal is to move as much money as possible, you want to make your flip right when the markets crater. Therefore, you’re able to move more into the Roth. When the Roth grows you then claim more tax free money.

The market the last few years has risen dramatically. Check out this chart of the S&P 500 ETF called the “Spider.” You can see that now clearly isn’t the “perfect” time to convert a Roth. It was a couple weeks ago, or a few years ago.

Let’s Look At The Forest, Though

I’m busting Mr. Bischoff’s chops only for the word “perfect,” not for the idea of performing a Roth conversion. I love a Roth conversion now because the only time we know it’s the perfect time is after the dust has settled. A couple weeks ago when the market was low we had no idea it would rebound quickly.

Don’t wait for the perfect time. Do it now.

Let’s face it. When the perfect time comes you’ll be busy doing something else. Pull the trigger on getting the work done and forget about nailing the timing. Perfect? No. Awesome? Yes.

Let’s now convince Mr. Bischoff to change the title of his article to “It’s an AWESOME time for a Roth Conversion.”