You are here: Home / Save / The Market’s Gonna Drop Like A Stone – Here’s My Plan 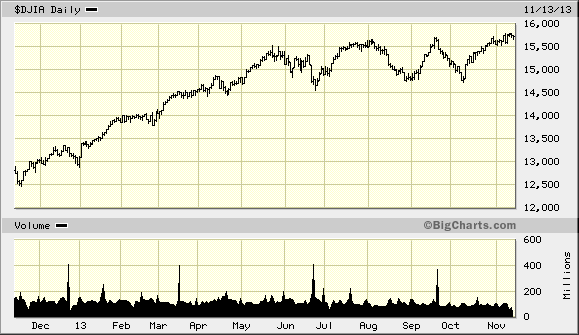 Wouldn’t you love a weather service advisory for the financial markets?

If there were such a thing, I think right now we might be under one….not a financial “thunderstorm warning,” but maybe just a “watch.”

Different than meteorology, which is WAY more scientific than you and I know, it’s just my gut that tells me it might be time for the market timers to exit stage left. Although I have some data (there’s data for every dumb theory)….after about 20 years of tracking the financial markets seriously you get a feel for the ebbs and flows.

Currently, here’s what bothers me: Wow, huh? If you’ve been following the financial press, you probably think that the market has been horrible this year. Your 401k plan would say otherwise, if you’ve been well diversified.

Why I’m Worried About The Stock Market

If you’ve followed the markets and don’t understand my consternation, it’s because I believe Warren Buffett’s classic quote:

My accounts, across the board, are up significantly. That’s problem numero uno. Historically, whenever I start to giggle when watching my investments, there’s dangerous waters ahead.

Now, it’s not that I’m without any data. Factor in these thoughts:

– In the near future there’ll be another merry-go-round of imminent government shutdown, as Republicans and Democrats play Russian Roulette with the debt ceiling.

– The Fed may change hands at the top from Bernake to Janet Yellin, We have no idea if she’ll unwind the current Fed Treasury buying spree.

– According to the National Association of Realtors, home prices are predicted to rise, but sales will be flat.

Those could be a recipe for high winds.

Need more? My buddy Henry tends to agree with me.

So, I have a lot of reasons to exit the market. But will I do it?

I will do nothing.

Why? Blodgett says it best in his article, but I’ll take a stab:

1) I’m a long term investor. When I began as a financial advisor, I’d often trust my gut. Over the years, I found out that my gut is about as wrong as anyone else’s gut. Getting “a feeling” about the market isn’t a reason to make a change. You learn not to trust your gut when managing your own money; you learn surprisingly fast when you make the mistake of acting on a feeling managing $60M dollars of other people’s money. Try telling a client that “I had a feeling.” That’s not the answer they’re looking for. Neither should you.

2) I have a mindset that’s prepared for a big dip in the market. I don’t want the market to go south, but if it does, I’m mentally ready for it. I think when many people buy stocks they mistakenly think that markets are going to be their friend. In two words: they aren’t.

Financial markets are brutal and quickly make lunch out of morons with itchy trigger fingers. Every time you invest you should understand that the market can nosedive. Once you realize the worst CAN happen over short periods, then you’ll prepare accordingly.

3) Which brings up my biggest point: I’ve prepared for the worst. Like any good investor, I do have an exit strategy. On some positions, I’ve placed stop losses in case the market drops so low that I don’t think I’ll be able to recover within a few years. These stop losses aren’t my friend either, by the way. If they hit, I’ll have a big problem on my hands….I’ll have to decide when to reinvest the money! Because I don’t have a crystal ball, that’s gonna be a challenge.

A bigger friend to me is the process of reallocating my money. By making sure my portfolio stays balanced, I’ll always sell high and buy low with my investments. Don’t know how rebalancing works? Listen to our latest 2 Guys & Your Money podcast on the topic.

So, if you’re like Mr. Blodgett and me and think the markets are poised for a fall, what should you do? I’d advocate making sure your defenses are in place, your portfolio is balanced, and walking away from talk of “what if” and “maybe” in a down market (of course, except for this article, which you were brilliant to decide to read…and finish).