You are here: Home / Podcast / Preparing for a Bear Market (or How To Become Hysterical For No Reason) 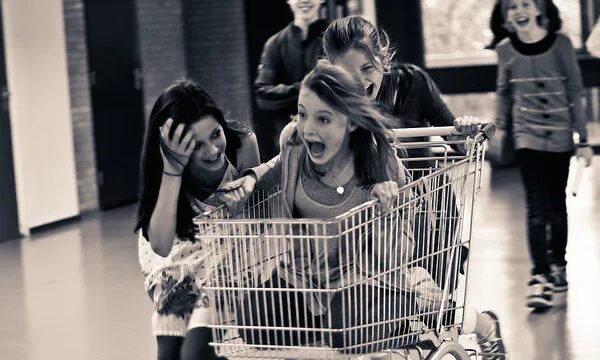 Back in ancient times….in a month and year we’ll call September, 2014 (a mythical year, really….not sure if you’d remember it) the stock market sank dramatically, leading Kiplinger to release an article about how to prepare for a bear market.

A bear market? Really? This is like declaring that someone with a mild fever has ebola.

You see, there are various definitions around what specifically defines a bear market; however, most people would agree that it represents a greater than 20% decrease in most stock market indicators over a period of a few months.

I’m fairly certain this must be the time for us to batten down the hatches, stock up on canned goods and prepare for the doom and gloom of 2009. I remember that year, don’t you? I’m not sure how I’m still alive.

Let’s Step Back From the Cliff, Shall We?

I read headlines like these all the time and know that it’s just hype to gain reader traffic….but I wonder: how many people act on this media generated hysteria around stock market performance?

Back when I more actively managed client portfolios, I know that many of my clients suffered from what I called “CNBC Fever.” Where they would watch CNBC while they were working out, get in a panic over something, and call me immediately from the treadmill to discuss.

I know advisors who hated these calls and rolled their eyes when the lines came in, for me, I loved getting them because they provided me with another opportunity to show my clients that I was one step ahead of them already. In fact, I would remind them that they should hope the hysteria catches on because then we would make more money.

Over the long run, consistent market investments will pay off; however, there are times when smart investors are afforded the opportunity to make money and this is when there is excess volatility in the market, or as I like to say, “When hysteria replaces rationality.”

The last time we saw hysteria gain traction in the market was in August 2011 when Standard & Poor’s lowered the US government’s bond rating from AAA to AA+. I remember working on the trading floor that day, and you would have thought Henny Penny had just stood up in the middle of the room and said the sky was falling….and we all believed it.

From that day until early October 2011, the stock market lost about 7%, and I remember telling clients who were sitting on the sidelines with cash that they should buy the market since hysteria had taken hold. People assumed that the US would default on all of its debts and we would be taken over by China. Few listened to me and hesitated. The market has risen 43% since August 2011; however, if you bought on the hysteria in October, your stock portfolio would be up 54%.

If you are investing, I like keeping a portion of your portfolio in cash so that you can take advantage of the moments of hysteria. It’s hard sometimes to jump in when everyone seems to be jumping out, but those are the moments that you look for as an investor. As long as you are on the right side of the hysteria trade, you’ll make money.

Are you prepared to make money when hysteria takes hold?