You are here: Home / Podcast / Improve Your Career Trajectory In One Easy Step 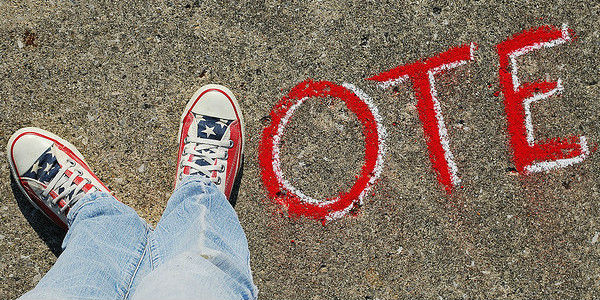 Today is voting day. Cheryl and I will head to the polls around noon to vote for our favorite candidates and initiatives. In some cases, we’ll vote less “for” our favorite but “against” candidates or issues we hope won’t pass.

I’m pretty proud to say that during my career I worked with people from many different religious affiliations, different cultural backgrounds, and who held different beliefs. In quite a few meetings, even though I wouldn’t bring it up, many people told me how they felt about their favorite political issues. If I disagreed, I’d find a middle ground and only comment on areas where I agreed. I can confidently say that I’m sure most of them felt that my point of view and theirs aligned. Was that lying on my part or salesmanship? I’d say the latter.   Want to improve your career trajectory? Here’s how: I don’t understand why any commercial operation would make their political views known unless it directly affects their ability to do business with a customer. There’s no reason for people to know whether I like or dislike a given issue.

One advisor in our office always had trouble getting new clients. Yet, he would freely talk politics with anyone who walked through his door. Well, he didn’t “talk politics” so much as proselytize about how bad people were who felt differently than him about a particular issue. He’d tell them exactly how he felt. In some of the interactions I was sad enough to be involved in, the client would nod awkwardly sometimes and I could tell they clearly didn’t feel the same way.

Why the hell would I share my beliefs about something that had nothing to do with money management? The people who differed on those beliefs would probably walk away, because we know that people just want to work with people who they feel are “like them.”

You might say to yourself, “Joe, the politics of the country effect how we’re able to manage money.” You’d be correct. However, is my little tiny platform going to change that? No! The only thing it’ll change, in our sharply divided country, is that it’ll upset half of my customers.

…and the funny thing? some of my favorite customers were the ones who disagreed with me politically.

Plus, effective financial planning is about how you deal with law changes, not about evangelizing on what the law “should be.” Right or wrong, when the Roth IRA was born it was my job to know how it worked and tell my flock what it meant to them. They didn’t care whether I “loved it” or “hated it.”

By the way, a few advisors I knew thought the Roth IRA was wrong and told their clients not to use it. Imagine an advisor having that attitude now?

You may call me a coward for shying away from politics with clients. I’d call myself pragmatic and a realist.

Your Politics On Your Sleeve? C-Ya!

I took my son to a dermatologist a few years ago. They were playing political news in the lobby and there was a political cartoon on the door to our exam room. Neither the joke nor the political channel had anything to do with my dermatology appointment.

I found it offensive only that my dermatologist was hurling his political beliefs down my throat when all I wanted was to get rid of my kid’s zits.

If the doctor and I were in a conversation and politics had come up, I would have accepted his beliefs (preferably over a beer or lunch instead of during an appointment). I would have loved a healthy debate. His office? I’m not interested and I won’t be held hostage while you tell me your political views.

What would have happened if I’d said to him the second he walked in, “The Detroit Lions are the best football team in the USA….I don’t care what you say! They’re the best!!!!!”  He might have said, “Why is that relevant?”

I would have answered, “Exactly.”

So I’m pretty fired up because today I get to go into a voting box and tell the nation what I think we should do for the next (at least) two years. I hope you do, too.

This isn’t a rant about what you shouldn’t do (talk politics while doing business OR if you’re a Facebook friend of mine….). It’s a rant about how I think you should use your opinion.

Go to the polls today and vote.

More voting equals better laws that serve more people. It equals people who actually know the issues instead of dumbed-down political advertisements. It means better discussions about the future of our country instead of who’s winning Dancing With The Stars.

Say it today. Just don’t tell me when you’re my doctor, my financial advisor, or serving me chicken sandwiches.