You are here: Home / Podcast / The Time I Accidentally Shopped at J. Crew 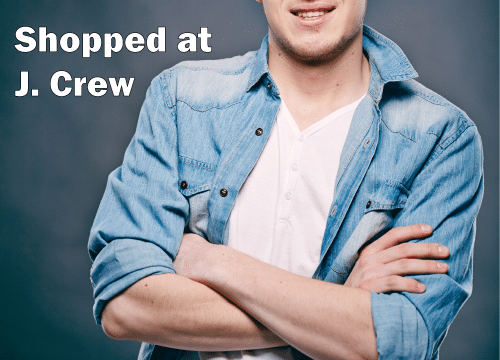 The shame…but hold on a minute!

Before I have to give back my “Middle age guy who doesn’t really give a f$%# about style and might look like he’s kinda given up an eensy bit” card, I should explain.

My daughter was competing in Little Rock, two hours from home. We shouldn’t have left for the meet after looking at weather.com. In fact, it went like this:

Me: It looks like this massive storm is going to hit right after the mile and then you won’t have to run anything else.

How that should have read was:

Me: Hey, we’re making a horrible decision spending all this money on gas to drive four hours so you can run one race, and I even looked at the weather to verify it!

Sometimes the mental lapses are disturbing.

BUT the meet was in the budget. We’d planned on going. At the very least it’d be an enjoyable day in Little Rock….so we were off.

…started just about three minutes before we arrived at the track. In fact, we were pulling in when we received the text, “MEET CANCELLED.”

Now I’m two hours away from home, and we have no meet. Normally this meant a hike along the river (free entertainment) or possibly a minor league baseball game (cheap entertainment)…but there was that rain, and the diva in me doesn’t like to get wet.

Remember the thing I mentioned earlier about being the guy who might look like he’s given up just a little? Sure, I run marathons (8 so far in the last 2 1/2 years), and I’m uber-handsome, but J. Crew I’m not. IF you take a close look at my socks, they may or may not match.

Cheryl’s head spun around. “Go where?”

I could have said, “Let’s go to a KKK rally!” and she would have been less surprised.

“J. Crew,” Autumn said, and that was the lynchpin. Our trip to the high-end mall was going to happen now. Autumn could give a s$%! about J. Crew. All my teenage daughter had heard me say was “Shopping trip,” which is interesting because neither of those words had left my lips.

The “I Shopped at J. Crew” Story and Lesson

Why was I going?

First, I’d read a report about the miraculous turnaround at J. Crew in Fast Company magazine. Even though I’d already read much, like most middle age non-metrosexual men, I hadn’t paid much attention. Now I was interested in the company and wanted to have a look for myself. Was J. Crew something that the masses would like? The results seemed to speak for themselves. While J. Crew is a privately held company, competitors such as The Gap (GPS) have switched course, selling J. Crew knock-off looks with much success. GPS stock alone is up over 29% YTD as I write this (vs. the S&P 500 which has risen 13.5%).

In the case of J. Crew, there are two lessons to business managers and entrepreneurs:

See? Four paragraphs about an apparel company. That’s how fired up I was about seeing the J. Crew miracle (that had taken ten years!) in person.

Autumn: Dad read some article about how great the company is and wants to go see the store.

She was right. That was the 2nd reason I wanted to shop at J. Crew. I used to wear stylish suits to work and lately I’ve missed appearing like a businessperson. Now that I’m writing, I’ve gravitated toward shorts and a tee shirt on a daily basis. I’ve run so many marathons and 10ks that on most days you’ll find me with a “Galion Pickle Festival 5k” or “Run the Line Half Marathon” tee shirt. I’m nowhere near stylish.

During my investigation, J. Crew’s marketing machine sold me. I was impressed by the huge number of wearable pieces on their website. Most of it was for a younger guy than me. That was okay. I wasn’t looking to buy. Well….I wasn’t until I saw an item called, “My Favorite Shirt.”

The text described that shirt that goes with just about anything. You grab it and go….head to a bar, out to dinner, a night out with friends, even your favorite religious service in a pinch.

About six months ago I’d cleaned out my closet in a quest to eliminate all those things in my house that I didn’t need. My closet was a mess of Maybe I’ll Someday Wear This Again’s and Hopefully This Will Come Back In Style. I’d cut to the bone: 5 collared short-sleeved collared shirts. Five pairs of shorts. 10 running shirts. Three pairs of jeans….and you get the picture. From now on my closet was one in and one out. I was headed to buy My Favorite Shirt and dump Doesn’t Make the Cut.

This opened my eyes: my budget allowed nicer clothing now because I was buying far less. I was getting better mileage out of my clothes, wearing fewer pieces more often and was beginning to notice that some shirts and pants were wearing out faster as a result. In the first three months I threw away three shirts and destroyed two others accidently (well, one wasn’t spoiled by me exactly…but by my friend named Pinot Grigio….not a big fan of yellow shirts, apparently).

So, adding My Favorite Shirt to the wardrobe? Hells yeah.

The Part Where I Walked Inside An Actual J. Crew Store

What a disappointment. Was the store nice? Yes it was. However, in my head, I thought good clothing and upscale mall presence meant great service. There were exactly two employees in the store. One smiled and said hello before jumping on a personal phone call and the other never looked at us until I asked him about My Favorite Shirt.

He had to look it up. He did that without a smile. We were apparently far less interesting than the stack of shirts he was refolding.

It turned out that My Favorite Shirt was just a catchphrase for shirts J. Crew sold. Who knew?

He opened the dressing room door without commenting on my clothing choices or offering to help.

At first I thought this was because I wasn’t the target audience. I clearly didn’t look the part (beyond the fact that I do look like a guy who might have a little money). On top of that….I’d brought in a teenage girl! That’s a bonus, isn’t it? Not in this case.

Sure, J. Crew has made a dramatic 10 year turnaround. The styles in the store were great and they weren’t doing that awful perfume thing (what the hell is that????) that happens at Hollister or Abercrombie and Fitch. That’s all fine, but until you put some service into the clothing industry, I won’t be back at J. Crew any time soon.