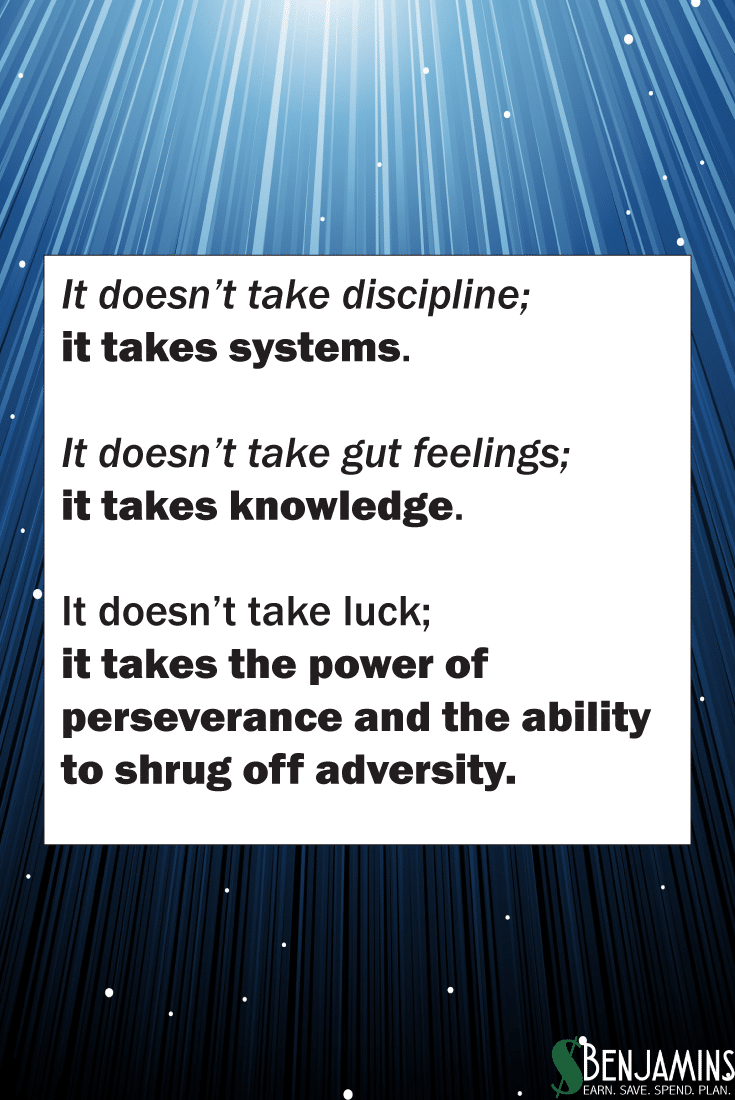 Get a plan. Stick to it. Keep a high signal/noise ratio.

I read a ton. Well, I don’t read fast, so I read what feels like a ton, but may or may not be ALMOST a chapter of a book, a few articles in magazines like Fast Company, Esquire or Inc., and about 50-60 blogs per day. Consequently, I read a bunch of contradictory thoughts….noise. Some of it is fun but misguided. Others are sincere but painfully boring. Still others hit the nail so squarely on the head that you don’t want to read because it’s a train wreck.

Stacking Benjamins is a place designed to cut the noise. Benji Stackers have their eye on the prize.

I’m a Catholic and was enthralled by the new Pope’s coming out party a few years ago. I was captivated by the media circus around the event. Isn’t Catholicism in the United States kind of the quiet backwater? Aren’t we the group that people forget about except when priests get creepy?

I bring this up because I was even more enthralled by Steve Martin’s fantastic tweets about the event. He said that Catholics are some of the only people who will laugh right along with you when you make fun of their religious practices. Different than, say….ISIS, Catholics by-and-large have a great sense of humor. Not all…I wouldn’t make that generalization about millions of people, but I tend to agree. We’re a pretty relaxed bunch.

So, if Catholic = fun, sense of humor, and relaxed, Stacking Benjamins is a Catholic website. I don’t mean we’re going to talk religion….I mean that Benji Stackers like to have a good time.

I enjoy dissenting points of view. I have many faults. I swear a shit-ton. I’m NOT a snappy dresser (though I found people who were good dressers to help me when I was on television). I’m a geek beyond saving (my favorite things are board games and folk rock music….).

One fault I don’t have is listening. I’ll give myself a little pat on the back and say that I’m a good listener. I want to hear what you have to say. I especially want to hear it if your view disagrees with mine. I like arguments. Don’t be afraid to challenge my thinking and I won’t feel bad about calling you out when I think you’re wrong.

Stacking Benjamins is a site with many strong opinions. Benji Stackers like to learn by hearing other points of view.

Here’s one strong opinion: my unrelenting belief about wealth:

You don’t have to try and become wealthy. That’s not a goal you need, and I talk about that in my white paper.

What does this mean?

Your income stream is important. If you can focus all of your energy on one task, you’re likely to earn lots of capital—far more than if you spread your time among a bunch of diverse tasks. I’ve never seen high-income earners who reached the summit by spending their day chasing three careers. It was all or nothing AND….and this is the big “and”….they weren’t well-rounded people. If you’re going to get rich by earning lots of money, you can’t afford to be well rounded.

Balance is a myth for these people. Remember, it’s the cracked ones who let in the light for the rest of us.

For people who reach the brass ring of high-income status, the key is to diversify your wealth among easy-to-understand investments. You won’t have the time to chase investments that pay amazingly well. These investments need to be nurtured and managed. Many stars bankrupted themselves by going into fields that conflicted with their own. Burt Reynolds opened a bunch of chicken restaurants in Florida (what does he know about chicken restaurants?). Kim Bassinger tried to start a Hollywood-type theme park in Georgia (when did she imagine she had the time and energy to open a theme park? Billy Joel handed it all over to a manager who was going to “take care of it” and instead took Joel to the cleaners.).

The reverse is also true. If you can’t earn a ton of money at your primary line of work, that’s not the end. There IS another path for you. Apply the rule in reverse. If you’re going to diversify your income, then you need a laser focus when investing.

I think this is exactly why financial advisors are so mistrusted.

What they ARE and what they promise TO BE are often two different beasts. People say that those who work with financial advisors are bound to fail, and it’s true. A financial advisor’s job isn’t to win; it’s to avoid losing. That’s why my best clients were high-income earners. They had a laser career focus and wanted someone to protect their money. I was that guy. I wasn’t the “get rich on investments” guy.

Stacking Benjamins is a place about laser focus on career and diversifying investments, because that’s the path to victory I know best. Stacking Benji’s are career minded, looking for ways to move the ball further and faster while developing investment strategies that’ll protect and grow their capital.

You have the ability with your two hands and that good looking brain of yours to be wealthy.

It doesn’t take luck; it takes the power of perseverance and the ability to shrug off adversity.

Hang on, everyone! It’s gonna be a wild ride from here.