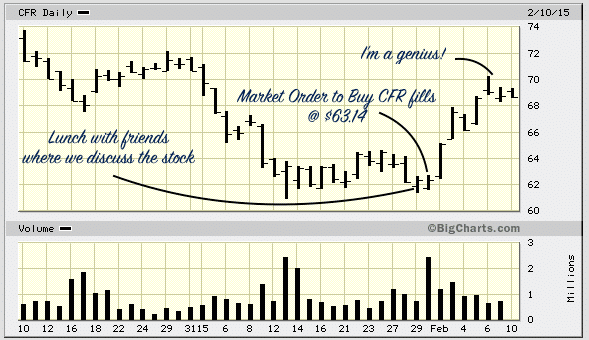 It’s been a busy couple of weeks since I last updated you on my portfolio.

I’ve agreed to track my IRA trades using Nvestly, a social investing site that allows you to see other people’s positions and trades WITHOUT seeing their total portfolio value. It’s been surprisingly fun and interesting to follow other investors in real time. Want to try it out? Check out nvestly.com.

After three straight weeks of losing, I was pleased to get this email from Nvestly:

When we last discussed the portfolio, I was about to pull the trigger on my Indian Rupee investment, the Wisdom Tree Rupee Index. I placed a trade by using a trailing stop loss order. Originally, I set the order at $21.33, but because rupees rose slightly, I was able to squeeze out an extra $.10 per share. I love trailing stop losses to sell positions!

That left me with some cash, and frankly, in a volatile market, I wasn’t sure what to do with it. In those times, I turn to my overall asset allocation to see where I have weaknesses and strengths…the golden rule:

don’t try to guess where the market’s going next.

…but literally, the moment I opened up my browser to plan my next move, I noticed this article from Fox Business: 3 Bank Stocks To Buy in February.

Yeah. I was going to bookmark that trash so we could rip the hell out of it in the podcast. Any investor knows that there’s never, EVER anything you need to own NOW, except maybe a couple cool Stacking Benjamins tee shirts….BUT I’d already ordered mine, so it was time to rip away.

And that’s when I saw it.

Let’s jump in the time machine for a moment…..rewind the tape a little….every Friday I have lunch with the same group of people. It’s fun to get together and discuss the last seven days. We have a lot of laughs, and every once in awhile, we talk seriously.

One friend, a banker, was discussing the toll that the oil downturn was having on the local economy here in Texas. We’d covered a wide range of topics, but he passingly told me that Cullen/Frost Bankers shares were way down at the bottom of the toilet, and he thought it wasn’t for a good reason. He speculated that shares were lower only because Wall Street traders didn’t realize how much more diversified the Texas economy is now than it was in the 1980s when Houston nearly crumbled.

That made sense to me. Lots of Wall Streeters look for something called the next domino. Everyone else is trading oil….so to make more money, instead find the next domino that will fall or rise and trade it instead. In this case, if I weren’t in Texas, I’d bet that the money people were making in oil would go to the bank, and in this case that next domino to crumble would be the bank that these people use.

I didn’t do anything about it….until I read the Fox Business article above.

Don’t get me wrong: we’re still ripping the article on next Monday’s podcast….but you know where this story is headed. Cullen/Frost Bankers was one of the three banks listed.

Now I was in a hurry. I read everything I could about the bank, looked at the trading data, and knew that this was my “next domino,” but on the other side of most people’s play. It was (and still is) my opinion that my friend was right: this bank was unfairly in the crosshairs. Maybe it’ll be hit a little, but not as bad as the stock has tumbled. If you’ve been reading this blog for any length of time, you know that this is my favorite type of trade. It’s lower risk than most because I’m picking up well run companies at a discount. I’d done it with Disney, Bank of America, Carnival Cruise Lines and more.

I pulled the trigger.

Sometimes you’re good and other times you’re lucky. I’m glad that I’d done my research, but I’m also glad I’d acted quickly. Within two days I was up nearly $6 per share. As of this writing, I’ve gained 7.55% in less than two weeks.

Let’s pull up my Nvestly pie chart to see my current allocation: I STILL haven’t addressed my mining stock conundrum (DNN), and I’m as anxious as ever to exit VXX, the volatility index. Playing volatility isn’t a great long term position (who the hell can predict it?), and mining appears to be down for a long time. While I still like DNN and want to stay, there are nearer-term opportunities available. VXX already has a limit order placed against it. Lots of people are calling for the market to hit the fan…and if it does I’ll cash in.

Here’s what I’m trying to avoid, and it’s a mistake many investors make: they trade away winners while holding on to losers, hoping they’ll come back. In my case, that hasn’t happened. While I was making 7.55% on Cullen Frost, you can see from the ICN chart at the top of this post that it’s down about 1%. That’s a good trade.

More in a couple weeks! Follow me on Nvestly to see my trades immediately.