You are here: Home / Podcast / A Well-Rounded Education Is More Than Just Grades 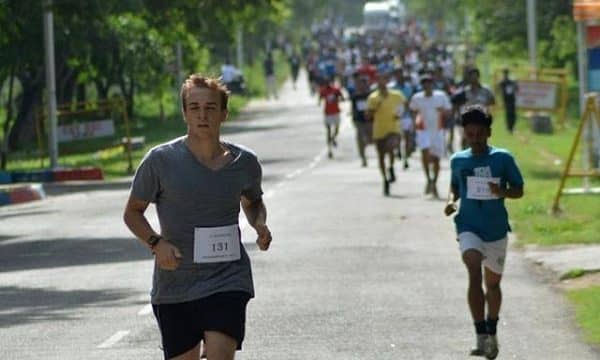 You’ve heard of my son, Nick, if you’ve followed the podcast at all. If not, he’s riding 4,500 miles for cancer research next summer and I hope you can support it!

My son studied last summer at the India Institute of Technology. Besides being a summer filled with grueling classes, he experienced a culture he hasn’t ever seen. He participated in a 5k race (finishing second). The photo from the race looks like he’s being chased by a mob of Indian people. He loved every minute of his summer and widened his lens about the world. I learned more about life in college than at any time, but much of it was the experience of taking classes, not the actual material. I learned how important it was to be on time when my professor would lock the door immediately at the beginning of class. I learned how to focus when I had to read a book every week for a grueling English class. I learned the importance of choosing your battles when I had two exams the same day.

I also learned from bad jobs. I worked at the Michigan State Cyclotron, building radiation walls (wouldn’t it be cool if I glowed in the dark? No such luck.). I was a telemarketer, calling alumni and asking them to donate more money to the University.

The one thing I didn’t learn was how to view the world with a wider lens. My son already has a leg up on me on that respect.

What I Learned From Traveling Abroad

You can nearly always tell when someone has experienced other cultures. They’re largely tolerant of other ways of doing things. They appreciate new foods, new dialects and different value systems. That’s not always true, and it isn’t scientific, but for the most part, I’ve found that my friends who’ve traveled are more open to new ideas in general than people who haven’t. Whether you decide to study at the India Institute of Technology or add to your education at the LSBF Manchester (London School of Business and Finance), you’ll widen your view of the world.

I also found that my best classes were only the beginning. They gave me a thirst to learn more about the subject matter. My class on South African history made me want to travel to the country, something I’ll finally do in 2016. My class on philosophy encouraged me to spend more time in movie theaters, enjoying different ideas and challenging my beliefs. I scour the paper because of my public relations classes, looking for anything that I can comment on or that will help our little Stacking Benjamins podcast or website.

College taught me how to be a self-starter.

I owe much to my college degree, but as an English major, it didn’t help me much in my career as a financial advisor. Well….it helped me a ton, but I learned about present value formulas, amortization tables, tax law and standard deviation, to name a few, on the job. In college I learned something else. I learned how to think, how to work with others, how to be critical without being rude, and how to manage on less.

What did you learn in college outside of the classroom?