You are here: Home / Podcast / Want To Do Something Remarkable? Here’s The First Step 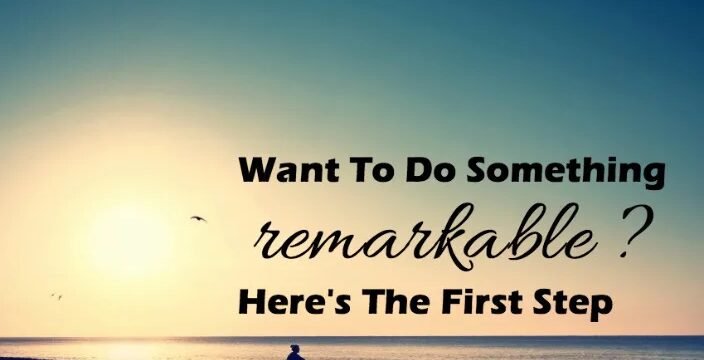 What remarkable achievement are you planning for today?

That’s what’s on my mind lately.

I’ve decided I have too many throwaway days. You know the ones. They’re those days I get about halfway through and decide I need a break. Checking Facebook, reading or watching television are better activities than working hard on those days.

It’s time to up my game.

I need to think bigger.

At this moment my son Nick is folding up a campsite in Abilene, Texas, pulling on his jersey, and forming a circle with 21 other University of Texas students. Each will take a turn dedicating the day’s ride to someone who’s either fighting or succumbed to cancer. Some will write these names in grease pencil on their skin. Others will mount a notecard on their handlebars and stare at it for eight hours as they pedal. Some will contemplate the person in their mind as they push onward. Nick will ride for 70 days a total of 4,500 miles, from Austin, Texas to Anchorage, Alaska. Every day will start pretty damned near the same.

What’s ironic about Nick doing something so remarkable is how un-remarkable he is on a daily basis. I’m not saying he’s unintelligent or uncreative. On the contrary, he’s an engineering student, was the captain of his high school swim team, and loves hanging out with friends. But he’s a normal kid. He does his laundry less than his mom thinks he should. He tries to hide when it’s time to work on chores around the house. It’s nothing horrible, but also not what you’d expect to hear when you find he’s on a 4,500 bike journey across America and Canada.

The best part? All the kids on the trip are like Nick. Check out this video of the work they’ve done.

So where does remarkable start? With Nick, it started with a commitment. Two years ago at orientation someone offhandedly mentioned Texas 4000, a charity group that rides for cancer research. Nick thought it sounded like a challenge…and it sounded a long way off in the future. Surely he could do something remarkable two years later, couldn’t he?

It started because he applied. You had to apply to be even considered….they don’t take just anyone. Because he applied, he was accepted. In fact, roughly 90 students were accepted into the group. You had to be strong; you had to be able to raise money and you had to have an internal drive they could see. 18 of those who applied didn’t make it to the starting line. In short, you had to continually and increasingly believe you could do some seriously remarkable shit….and Nick was in the program.

All he had to do was apply. Take the first step.

Maybe you’re thinking to yourself, “How do I apply for something remarkable?”

I feel lucky because I’ve worked with some truly remarkable people. My boss at Ameriprise was the #1 group vice president in the United States. My immediate manager quit and climbed Mt. Everest twice. My clients were vice presidents at auto companies or engineers destined for big things. Some were entrepreneurs who created cool products we could only dream about. One made a lawnmower that trimmed your lawn perfectly without a human aboard. Another created algorithms designed to more effectively deploy police in areas of a city where the next crime was more likely to occur.

For all of these people, it started with a dream, but then closely followed by a plan. In some cases, like Nick’s, you’re handed a playbook to work from. In others, you have to come up with the book yourself. It’s remarkable alone that you’re doing some amazing things, but to also write the plays? Brilliant, but not necessary.

I feel lucky that my partner Kathleen has written a book to make my next year brilliant. I’m excited to get moving on my next journey. (See her Kickstarter here.)

I get frustrated when I find myself doing sub-brilliant work, and the coach in me gets angry watching others whom I know are brilliant do the same.

What do I think?

Being remarkable starts with thinking big….then planning the steps. Don’t look at the future. Nick applied to ride; then he rode 50 miles in a target time. He slowly raised $5,000 and then $10,000…..he took the riding and the fundraising one step at a time, hitting the little marks in the ground on the way to something epic.

Here’s your challenge, and mine today: What is your remarkable thing? What are the little marks you’ve made in the ground each day to move closer? I’d love to hear, and push you on them, in the comments.