You are here: Home / Podcast / Joe Talks With Paul Sullivan, Author of The Thin Green Line 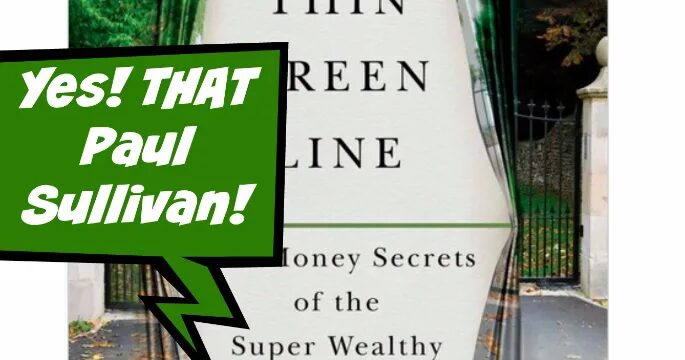 I was SO excited that Paul Sullivan, New York Times columnist and author of the book The Thin Green Line was including us on his book tour. Of course, Texarkana SHOULD be on any book tour….but some authors just don’t get the huge bonus they get when they come. A home cooked meal with mom and a thrilling conversation on bean bag chairs……we’ll share an excerpt from our interview:

PAUL: These are some very comfortable bean bag chairs…thanks for having me over.

The Thin Green Line is a way to divide the wealthy from the rich. That might sound like I’m splitting atoms here, but in my mind, when I was writing the book, I envisioned a line like the S&P over the last 50 years. It starts low, goes high, some dips here and there, but if you were on the top of that, you were on the “wealthy” side of the thin green line (no matter how much money you earned). So in other words, you were secure. You were able to make choices for yourself.

Conversely, if you’re on the other side, maybe you don’t make enough money, you don’t have enough choices….that’s not a great place to be. You could be a super high earner, way up at the tippity top, but your life is such a house of cards….you’re leveraged, you’re making poor decisions on a regular basis…..so you’re either hanging on to that line by your fingertips or you’re in free fall from it. You’re rich, but you have no security whatsoever.

JOE: Your story starts out with this argument…..between these four ultra-wealthy men….and they’re all having this discussion about who was the poorest during their childhood. Why did you start with that story?

There are actually 8 or 9 guys in the room in total, and they’re all members of this group called Tiger 21. It’s a support group, but this isn’t your normal support group. To get into that group you have to have 10 million dollars in the bank, but most of these guys have far more than that….and then you need to have a willingness to pay another thirty grand a year for the privilege of meeting.

I wanted to find out what it was all about, so they said, “We’re pretty closed, you can’t just come in, but if you want to pretend to be one of us for a day, we’ll let you do it.”

But it wouldn’t be a story if it’d gone smoothly.

I went in, presented my portfolio, and they could have cared less about my ETFs or the number of shares of Apple I had. What they beat me up on could really be summed up by the belief that my wife and I had that the future would somehow resemble the present.

One of the things they hated the most, was that me and my wife had been a little frivolous. We’d decided at one point to buy a condo in southwest Florida.  We never thought it was beyond our means. We’d never had any problems paying our bills. We saved.

They made a point….that was shocking and slightly depressing….because they said, “You may be able to pay for this now, but you’re not planning. What happens if something goes wrong? What happens if your wife loses her job? You lose your job? The economy changes again…..and remember, this was 2011 when we’d just come out of a bad, bad time.  They convinced me, rightly or wrongly, that we needed to sell that condo, because we could do something better with that money.

To this day I regret listening to their advice, because I loved that condo….but it was the right thing to do.

JOE: That’s so fascinating to me, because these hugely successful individuals aren’t that concerned with the investing portion of your plan.

That’s right. What I respected about them was that not only had they made a lot of money, but they’d made AND held on to their money….and their biggest concerns were, “How am I going to make sure this money has some value?”

You can hear the rest of my interview with Paul Sullivan about The Thin Green Line on our podcast (it starts around the 17:30 mark).  I found it fascinating that wealthy people are planners and not concerned with investment fees and hot stocks….aren’t you?