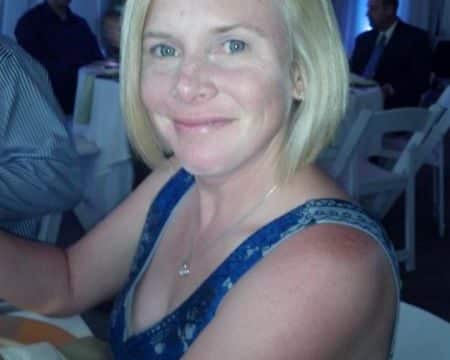 When I counseled people as a financial planner, many didn’t have crystallized goals or a pink phone. The first one really bothered me. Do you have a plan you’re working toward?

…the second one, well, is another story.

At the Financial Blogger Conference this weekend in St. Louis (which I thoroughly loved), I had to explain two things. Why was I:

To most, I explained that I’m running the Marine Corps Marathon in Washington D.C. this weekend. It’s one of the biggest races of its kind. 30,000 runners will lace up their shoes and trek 26.2 miles around our nation’s capital.

I’m sure I came across as this uber-motivated dude. In fact, some commented on that fact. While that’s flattering, it’s not really true. I’m still a doughnut loving sloth.

To a few people I explained more….that I’m pacing my sister through her first marathon.

That’s still not the full story. Let’s come clean: this weekend isn’t about my goal. It’s my sister’s much, much bigger goal.

My sister is a bunch of years younger than me. (To protect my image, that means that she must be about six years old right now, since I’m sure you think I’m 23….). We never really talked much while I was in high school. I hung out with “cool people” and she was navigating learning to walk, run, and ride a bike. It wasn’t until after college that we truly found each other. When she was in high school we finally bonded over important stuff like The Cure, crappy girlfriends/boyfriends and life-as-a-bitch.

Here’s something annoying: she’d always had headaches that were beyond bad. She experienced pains that doctors threw darts at diagnosing. As an older, incredibly-wise brother, I was pretty sure that she was just your typical younger-sister-whiner kid.

It turned out that wasn’t the case at all.

It’s funny; at that point in my own life, my goal was to “become something.” To be “someone.” To shine bright so that others could look up at the beacon of hope before them and exclaim, “He’s super awesome.” Now, two kids later and having found a little “fame” with local television and national media, I’ve realized just how flippin’ shallow I really was. That’s no longer my goal. I want to be helpful to my family. I want to be a good husband. I want to be secure with Cheryl in our retirement.

Because I was pretty self-possessed, I didn’t “get” my sister’s pain.

Well, I’m not sure, but it probably was to just feel “normal.” To stop feeling these excruciating headaches that people around her didn’t feel.

They made an appointment with top-notch doctors at Cleveland Clinic (one of the world’s most awesome hospitals), and the diagnosis wasn’t pretty: as I understand it–and I’m a medical moron–she didn’t have any bone holding her skull over her ear. It had disintegrated.

While the rest of the world could walk, run, think….every time she picked up a bag of groceries, her daughter, or tied her shoes, she’d have a different sensation than you and I. She could hear her eyes twitch….in fact, she could hear so much that it spawned those headaches. Imagine what that might do to your overall outlook on life.

She and her husband made a tough decision: she’d let them cut into her and replace that bone around her ear. It had only been done a handful of times. In fact, she was the topic of some health-related news stories. Not unsurprisingly, there was a chance that she could die. When I saw her before she went under, you could see the fear in her eyes and when you couldn’t, you saw it reflected in those of her husband.

It made me focus on my own mortality. How come she had this problem and I didn’t? What was the point of life? By this time I’d already begun Average Joe’s Money Blog. Pounding out 500 word budget articles felt so f-ing irrelevant to the real world when my sister was about to undergo such a huge surgery.

But in the weeks leading up to the procedure, that wasn’t what she focused on. Instead, she helped others. She volunteered, cranking out pillowcases for people in the hospital who weren’t going to get better soon. She threw herself into community service and thinking about every else’s problems. Why? Hell, I don’t know. If it were me, I think I would have wallowed in my own issues, but my sister’s method for dealing with it was clearly to think about everyone but herself.

Before her surgery, she found out that she’d lose her hair. So, for fun and to support diversity, she decided to mess with her look. My always-pretty-conservative-looking sister grew a funky 80’s wave. She dyed it. Then, just before her big event, she changed it into a Mohawk.

People who saw her on Facebook and didn’t know her thought she was going off the deep end. I thought she was awesome. It wasn’t my story to tell, so I just shrugged my shoulders.

More great news: she took up running again after her doctor told her it was okay to do so.

I could tell from far away that she was looking at life differently. I’m too far away to tell for sure, but my sister had made some big life changes that we should all probably think about making. She still volunteers. She has a new job. She guards her health.

I received a call from her in February. She said, “I want to run my first marathon. Would you pace me?”

So, why was I headed out on a run while everyone was going to the bar? That’s easy: I don’t want to let her down.

On Sunday I’ll line up on the starting line next to my kid sister who has taught me a ton about the value of service, of being just a little bit crazy, and about making some wise choices in the face of incredible adversity. It’ll be my pleasure to help her across the finish line.

I hope you join me in learning from this amazing person. Ask yourself….What are my priorities? What are my dreams? Am I just living in excuses or am I fighting to achieve “my marathon?”

It doesn’t matter to me which finish line you’re shooting for….but I know you have one.