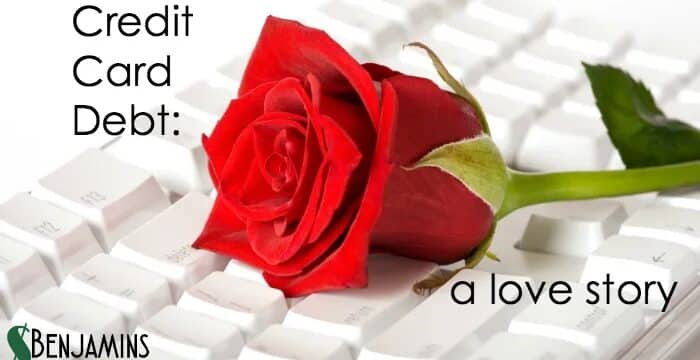 “You don’t have any credit, and you need to start building it if you ever want to get an apartment,” my roommate told me. It was my freshman year of college. She found me a CapitalOne card with a $500 limit. “Just make sure you pay it off every month,” she told me. So I did. I followed her advice for years. At one point, I signed up for an MBNA credit card (do they still have those?) so that I could get a free Mariners blanket at a baseball game. I was smug. “The joke is on them! I’ll never carry a balance!”

Five years later, I found myself in a very expensive city with a job that didn’t quite pay my bills and a lifestyle that didn’t include boring things like staying in, cooking dinner, and saving money. If the day ended in Y, I was out. Cheap places, sure, but even if you go to dinner at cheap places, it adds up after five to six nights a week. Plus, let’s not even talk about how much I was spending at the bar.

Early warning sign: “Everyone chip in with cash, and I’ll put it all on my credit card,” I’d say. “I want the airline miles!”

The punchline, of course, is that the chipped in cash never went toward my credit card bill. Not once.

I started slipping. My bill was more than I could afford to pay off in full. No big deal, I thought. I’ll pay more than the minimums, and once I make more money, this will all be easier.

Why else would they send me an envelope filled with blank checks?

If that’s not love, what is?

One day, I wrote a check, from that magical envelope of blank checks, for the full amount of my line of credit. This was 2006, and for some dumb reason, the bank extended somewhere around $20,000 in credit to this idiot.

And a friend of a friend had a deal I couldn’t miss out on!

He just needed some cash to get a patent out of the British legal system.

[offscreen: Sounds like an email scheme that targets old ladies, doesn’t it?]

So, both my friend (okay full disclosure, it was my boyfriend at the time, but this love story is about the credit card, not the man!) and I gave this British guy $20,000, which we were told we’d get back in six months.

We didn’t. But you saw that coming.

For years, I paid double the minimum on my credit card and was hardly seeing any progress. But I almost never looked. Just like any bad relationship, I willfully blinded myself to the terrible situation I found myself in. I made excuses, I kept spending even as I was paying down my debt, heck, I even took six months off work! Why did I have to work? I certainly wasn’t worried about my debt or future earnings.

Then, one day, I turned 30. I’d decided enough was enough. It was time to break up with my credit card (debt) once and for all. That’s the day my life changed forever. I started writing about my debt and tracking my way out of it on Frugal Portland, and that’s when I met Joe and a bunch of other people who were willing to read my story. I wrote and wrote and blogged my way out of debt, seemingly ten dollars at a time.

In a true romantic story, there’d be some wistful glance back at that old lover now that we’ve been separated for so long. In some senses, I can look back on that time dreamily, but that’s only because my past self didn’t realize my current self would have to come along and deal with all of this.

So, no, I don’t miss that old love of mine, even though we spent a great deal of time together, living the high life.

But I am glad I went through the whole thing. It was certainly a learning experience (as all unhealthy relationships tend to be).