You are here: Home / Save / Caitlyn Jenner’s “Publicity Stunt” Cost Her Far More Than Many Know 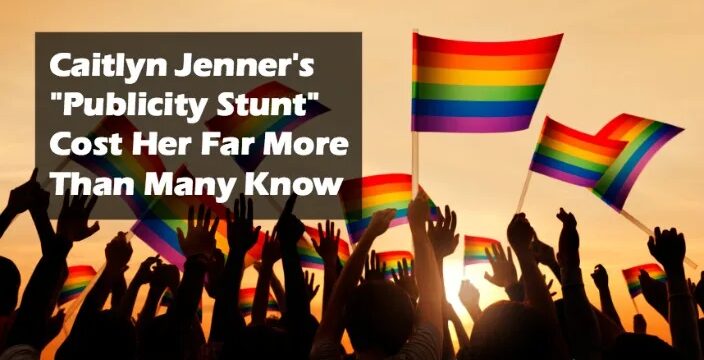 Big congrats to Caitlyn Jenner this week. By completing the transition from man to woman she now can expect about 10-15% less pay and a ton of sexy comments… nothing we can say on that topic that Jon Stewart didn’t already nail home.

But we can add in some financial issues that people haven’t thought about.

What does Caitlyn’s transformation mean to her investing and saving stereotypes?

Will she need to transform her money habits to fall in line with a backward financial industry?

More importantly, are there real financial issues here that will change?

On a recent episode of the Martinis and Your Money podcast, financial advisor Shannon McLay invited me to bemoan with her the sad state of financial workshops for women. I refused to present most of these workshops because they were so….incredibly….bad. Many of them propagated these awesomely stupid stereotypes:

I heard these countless times from advisors at parties, in meetings…and always in completely offhand contexts throughout my career. None should’ve shocked me.

Some of my clients lived these stereotypes. In meetings with couples, some men patronized their wives with so many platitudes I felt like I was back in the 1700’s (“Now, don’t trouble yourself with this, little lady….I’ll take care of saddling the horses.”). In others, the woman didn’t even pretend to pay attention….not because she wasn’t interested but because he made it seem like she SHOULDN’T be interested. In a meeting with one family, I tried many times to involve the woman while the man consistently tried to make the discussion so technical (and irrelevant) that there was no way she was going to follow along—not because she didn’t have the brain power, but because he had a finance MBA and she didn’t. Believe me, we weren’t talking about anything in those meetings that she wasn’t going to understand. Promise.

Advisors run a huge risk of falling for or propagating stereotypes. In many families today, women takes care of the investing and the man takes care of the budget. Our friend Farnoosh Torabi details several cases in her book When She Makes More

where roles are now completely reversed. The financial industry needs to catch up.

…And Now, The Real Issues

While I laugh about people who say this whole sex change operation was a publicity stunt (you think Bruce Jenner didn’t have enough publicity? Being married to a Kardashian wasn’t doing it? Wow….okay.), there’s some serious good news and bad news on the financial front. Let’s start with the good stuff: If Caitlyn wants insurance, at least there’s a little glimmer of positivity in that corner….if they’ll sell to her, prices are now lower.

Women receive lower prices on insurance because statistics show women live longer. Recent research indicates another idea the financial community had wrong: we previously thought women lived longer because of biological differences. Evidence now points to a different reality: more women take care of themselves than men. That’s not a stereotype, it’s science. Because men are in a “dirtier insurance pool” with more people who DON’T plan to live lengthy lives, insurances are more likely to pay early…and that’s a problem.

So…that’s good news, isn’t it? But that’s the tiny speck the bird missed when it pooped on the windshield of Caitlyn’s new life. As they said to me when I took my truck i to get fixed and there was a cracked manifold, “There’s gonna be lots of complications here on out.”

While I’ll bet Caitlyn has already earned enough to be comfortable for the rest of her life, women face a ton of hurdles:

Less money in and more out. Welcome to womanhood, Caitlyn.

There are Also Transgender Problems

Because they’re considered “different,” companies have been accused of illegally firing transgender workers. (Here’s a CNN report on a recent case.) Some transgender people are identified as frauds by their creditors and accounts have been closed because customer support people don’t believe they are who they say they are….because the voice of the person doesn’t match what we stereotypically look for from the person. If Caitlyn talks “like a man” and looks “like a woman” customer service people question the transaction. Plus, sometimes identification says one sex when the person is living as another (See one case here at Huffington Post).

In a 2012-2013 Prudential study on LGBT financial issues, most LGBT people were found to be more mainstream in their financial decision making than the world at large. That’s surprising to some people. Less surprising is that the study showed the financial community was not prepared to deal with many of the complex financial issues that LGBT couples and parents face.

For example, if Caitlyn decides to marry a woman (again) in the future, she’ll have to deal with a TON of problems she didn’t face as a man:

…And those are only the tip of the iceberg.

So What’s The Point?

Smart advisors looking to build their practices in the LGBT community have a lot of work to do. The financial world at large will be better served to steer clear of stereotypes around women and investing. While Caitlyn might be set financially, she certainly didn’t make it easier on herself becoming a woman. If this is a “publicity stunt,” (which we doubt) it’ll be a very, very expensive one….much more expensive than the cost of surgeries.