You are here: Home / Save / My Money “A-Ha”: Discovering The #1 Key To Saving Big Money 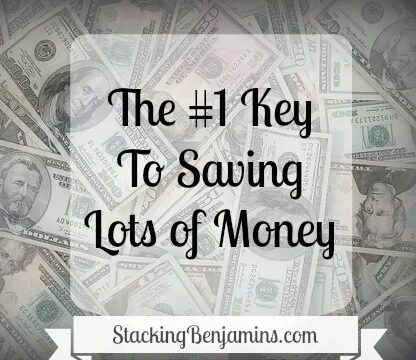 Today I’m participating in a blog carnival about “your biggest a-ha moment” with Shannon Ryan from The Heavy Purse. Check out her post and a list of all the other participating blogs here.

I always thought that people who saved gigantic sums of money were somehow special. They had a gene that made them able to save nearly half of their income.

I learned as an advisor that my theory was wrong.

I also learned that there IS a single key to saving big money, and it’s a key that you and I can both use. Stashing away money IS partly about making good sums of cash and about creating great cash flow. Those are two keys that make the task easier, but without them, they don’t make saving impossible. Also, making great cash and having wonderful cash flow don’t ensure that you’re going to save lots of money.

I’ve met many people with great income streams who blow it on silly toys or entertainment they can’t really afford. I had clients who made over $200,000 that found it nearly impossible to save. They’d built up a lifestyle that demanded every cent of that money, and my job was to help them reclaim it.

Great income and cash flow creates opportunity, but whatever your situation, you have to take advantage of it.

There’s a key that’s much, much bigger to saving money.

If you’re anything like me, to some degree you’re lazy and you have a wide range of more interesting hobbies than saving. If I have ten dollars in my pocket I’m going to find a use for that money, and it probably isn’t long term.

Also, the makeup of a human is that we’re supremely interested in survival right now. That’s why it’s incredibly hard to save for the future. We’re programmed to take care of immediate needs. Anything having to do with delayed gratification has to be learned. That’s why we enjoy eating. It’s why we enjoy purchasing “things”. We’re hard wired to take care of our perceived immediate needs, whether it’s buying clothing or entertaining ourselves.

So what’s the key to saving? It’s simple: set it and forget it.

Sure, it’s simple…but are you doing it?

The ONLY key is to hook up your income stream directly to your saving. People I met as an advisor who were “great” savers had this habit down cold. They were able to stash money away because they set it and forget it.

Get money out of your hand. That’s why set it and forget it is such a big deal.

My biggest a-ha moment with money was the moment that I found out that the key to saving was automation. Most people thought that it was something big….like being able to pick the right stock or to find the appropriate fund. It wasn’t any of those. It was simply the fact that the rich people I know put money away methodically and the people who were poor didn’t.

It sounds simple, yet it’s huge. That was a monster aha.

So, what did I do? Well, of course, I started automatically putting money away.

I’d look at these monthly “trickle” payments and see that I had some money set aside….and it turned out that I’d just put a few dollars away. However, now that it was saved, it was SAVED and I wasn’t going to touch it. Pretty soon, this $10 turned into $20. The money I was saving automatically was actually going toward monthly savings that mattered.

Let’s be honest. If you’re anything like me, to some degree you’re lazy and you have a wide range of more interesting hobbies than saving. That’s why set it and forget it is such a big deal.

Want More On This Topic?

. This is my favorite book on getting your savings plan up and running.

– Check out our podcast with Jacob Wade from iHeartBudgets on setting up a good budget (and we talk beer, too!): Stacking Benjamins podcast: Budgets and Beer episode.