You are here: Home / Podcast / Beyond the Podcast: Will Banking Be Easier In The Future? 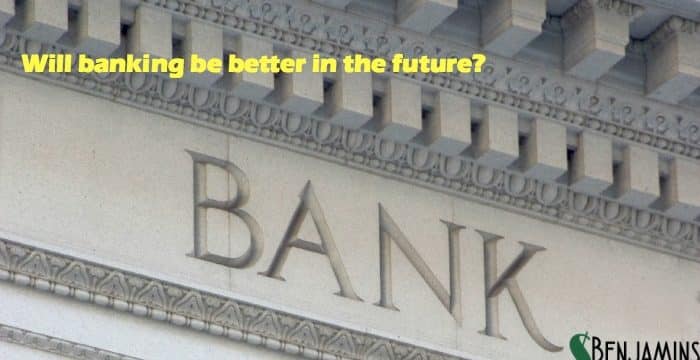 Does your bank frustrate you? You aren’t alone.

We were lucky that Jason O’Donnell, CIO of Bluestone Financial Institutions Fund, a hedge fund tracking the banking industry, came down to the basement last week to share with us his thoughts on the future of banking. This is a short portion of our discussion:

Joe: Welcome to the basement, Jason!

Jason: Hey, thanks for having me.

Joe: …are we all going to end up in the future banking with Bank of America?

Jason: I think ultimately we’re going to see a consolidation wave over the next few years. It’s already underway; deal flow…bank on bank acquisitions specifically…..are up twofold over the last couple years. So you can argue that consolidation is going to continue and not slow down. However, I think there’s plenty of room out there for smaller players as well as mid-sized players, and I think the mega-banks….I think if anything happens we may see a breaking up of the largest institutions.

Joe: Really? Why would that be? …is it because so many people dislike the huge banks?

Jason: It’s interesting you say that, because the largest institutions are wildly unpopular with many of their customers—particularly on the retail side—as opposed to the business side, and I think that’s reflective of some of the financial problems that they’re having. The way that the big banks operate, in general, is that their tendency is the gouge their customers. They make money by making their customers hate them. Charging them lots of fees and giving them a relatively low level of service. That’s a reflection of the fact that these banks are being pressured heavily by the federal government to maintain lots of excess capital, and they’re struggling to make returns on that capital that are adequate to shareholders.

I think all this comes together and tells me there’s likely to be some sort of unwinding of these institutions over the next few years or so.

Joe: It sounds like a race to the bottom.

Jason: It very well could be. If I bring it back to the consumer, some of these smaller institutions are likely to be able to provide a lot higher level of customer service, akin to what we’re finding at the community and super-community banks today.

Joe: So, that’s how they make inroad….higher customer satisfaction, which is good news for us.

Jason: Absolutely. And I think there are a number of things on the horizon with regard to technology that are good news for consumers.

Joe: So what’s coming in the next few years that you find particularly exciting?

Jason: It’s fascinating. We had this last 10 year period where there’s been a massive change in the way that consumers like to bank and businesses like to bank. Banks have been so consumed with financial and credit problems, especially during the financial crisis, that they haven’t really—for the most part with a few exceptions—haven’t adjusted to this new trend.

Customers today on both sides of the aisle…retail and commercial….they don’t want to bank at a branch, the way that they used to. So we’re seeing this massive transition during a time when banking institutions have clearly built up their retail branch delivery systems in a big way. So, it’s interesting….my sense going forward is that you’re going to see a great deal of de-emphasis on

the branching system and really a much heavier emphasis on technology to make consumers happier.

Joe: Meaning that my smartphone is going to be a bigger weapon than it is now?

Jason: Oh, it is. There’s a number of tools out there that someone savvy like yourself and some others….particularly millennials…..these young adults 18-to-35-year-old range, they’re using a lot of these applications already, but to be honest, the vast majority of them are not yet being utilized because they’re still relatively early. Things like text banking and pop money; text banking being that you can get information very quickly back and forth…in some cases very complicated information….with just three or four keystrokes. There’s pop money, where you’re able to send payment to a friend of yours essentially within a 24-hour period just by clicking a few keystrokes on your iPhone. There’s a number of things out there….remote check capture for consumers….that are available, but many of these technologies exist but they aren’t being utilized to the degree they will be in the next three or four years.

I’m glad Jason could share some insights with us about banks of the future. We also tackled lending, Apple pay (and others like it) and more. Want to hear the full interview? Check out this episode of the Stacking Benjamins podcast: Will Banking Be Easier in the Future.