You are here: Home / Podcast / Bats, Protesters and My Son’s Orientation 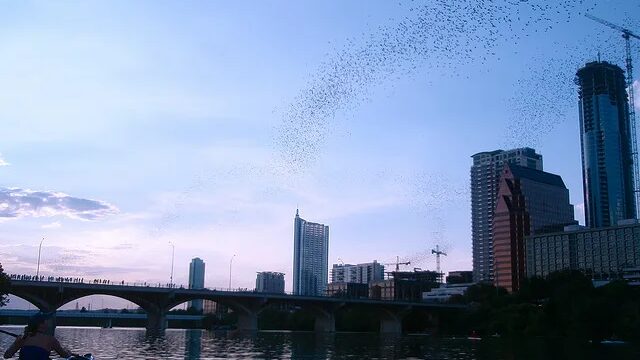 As I stand on the Congress Street Bridge in downtown Austin tonight, mobs of protesters march down from the capital a few blocks away. Tonight Texas hosted a huge political battle and tons of angry people with signs surrounded the capital. It’s good to see some Americans care so much about their politics. I think about how numb the majority of our nation seems when it comes to politics and money and my heart warms to see this show of anger and sincerity…on both sides of the issue. I keep hoping we’ll wake up someday and keep this ball rolling.

…but that’s another story, isn’t it?

Older people start snapping pictures of the sunset. There’s nothing better than the sunset in Austin over hill country. I helped “sunset” another part of my life today. It’s still hard to realize that soon both of my kids will be in college. If you have kids you know how they implicitly trust you. Even when they grow into young men and women, they still hear when you talk, even when they pretend they aren’t listening…and maybe I’m lucky, but my kids still like to hang out with their old man. It’s a bittersweet time. Overall, orientation taught me a ton about details on how much they’ll spend for food, what to avoid bringing on move in day (of course the Longhorns call it “Moooove In Day”), and how to avoid spending a billion dollars on textbooks. But those are secondary. In my heart, I know that I’m on an escalator to that day when I’ll say goodbye to two of the three people who are closest to me. I’m not looking forward to those days, but I can feel the escalator picking up speed.

I’m pleased my kids are plugged in. My son has decided to pursue electrical engineering (one of the top programs in the country) and my daughter is tackling the pre-med program at Arkansas. They’re not angels, but when it comes to seeking the right degree, I think they both nailed it. Hopefully they can see it through to a great job.

But anyway, back to the bridge.

I’m standing on this bridge at dusk with hundreds of other people when the bats begin their long march into the sky. Here’s what it looks like:

By the way, this photo is a quick moment in time. Imagine line after line of bats emerges from the bridge….it feels like it’s never going to end…almost like my kid’s childhood. But sadly, on both accounts, I know that I’m dreaming.

Somewhere I read that “over a million” bats fly out from the Congress Street Bridge. Do you know how many bats it takes to make a million? Before I saw it myself, I thought, “Yeah, right.” Boy, was I wrong. As line after line of bats flew out from under the span and ascended into the sky, all I could think about was how it was a day of people pursuing their dreams. My kids are both now one step closer to being college students in great majors. These protesters stood strong for what they believe. These bats are on a quest for food which will last all night.

…and me? What am I pursuing now? I feel like I have front row seats to a ton of other people’s dreams today. I wonder: What magic am I creating?

It’s days like today that bring on big thoughts. I like big thoughts. It’s generally after days like this that I’m a ball of productivity, cranking out big doses of whatever goodness I’ve dreamed up. It’s become a muscle: head out on a short “vacation,” feel the force of time and the energy of other people creating their future, then come home and use that energy to create my own future. It’s always enough to get me moving again. Refocus. Re-energize. Explode.